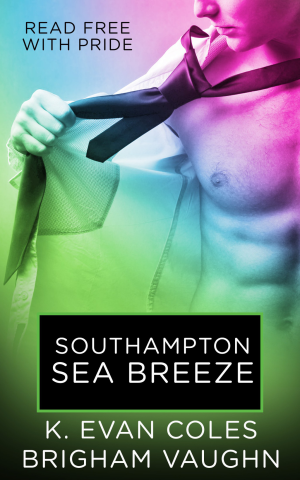 Despite having known each other for half their lives, it took years of heartache before Carter Hamilton and Riley Porter-Wright could admit they were perfect for each other. They’re in a great place now, and neither wants to rock the boat, but that hasn’t stopped Carter from thinking it’s time to ask Riley a certain question that’s been on his mind.

This free story is linked to The Speakeasy series, and features Carter and Riley from Calm and Wake.

“Happy to be out of the city for the weekend?” Carter asked.

“So happy.” Riley heaved a big breath. “The office was a total shit show today after being out of  town all week. And as much as I love having the kids at our place, it really is nice to be able to unplug once in a while. Listen,” he said, head cocked and a smile on his face as he stared upward toward the ceiling. “So quiet. I don’t hear anything but the music you put on when you came in here to make dinner!”

Carter and Riley blinked at one another as a small, metallic-sounding crash echoed into the kitchen from the rooms beyond. Carter pressed his lips together against a laugh.

“I swear to God, that cat is part elephant,” Riley muttered. He flicked his gaze to the door. “Think I should check on her?”

“No,” Carter replied. “She probably knocked over the fruit bowl again.” Their cat, Miss Zebra, loved to nap in a stainless-steel bowl that resided on the coffee table in the living area, regardless of whether it held fruit or not. Carter turned his attention to a bag of string beans that needed trimming. “Talk to me about work. What happened today?”

“Ugh, no thanks. I ran into my old man and I’d really rather not relive any of those moments.” Riley sipped his wine. “The rest was just catching up on an absolutely massive pile of paperwork that couldn’t be put off. I’ll talk about what we’ve got planned for this weekend, however.”

“Well, that would be food, booze and the usual shenanigans brought to you by our friends.” Carter smiled. “The guys have divvied up meals and I know Kyle and Luka are bringing a truckload of booze. I suppose it’d be wise on my part to remind you that the quiet you’re enjoying so much right now has an expiration date. By this time tomorrow, we’ll have nine in the house. And a dog,” he added.

“I haven’t forgotten.” Riley carried the rice cooker to the sink and turned on the tap so he could fill it with enough water for cooking. “I’m looking forward to seeing everyone, actually. I miss those bozos when I’m out of town. I’m not sure how long we’ll be able to keep entertaining the crew here, though, Car. Seems our ranks grow bigger every few months, and at this rate we may need to set up a tent in the living room to give everyone a place to sleep.”