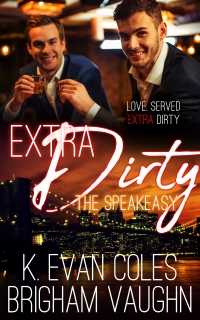 Jesse Murtagh set down the packet of financial statements he’d been reviewing and smiled. He was seated in the back office of Under, a speakeasy in Morningside Heights, and life was good.

With Under approaching its one-year anniversary, the bar’s earnings surpassed expectations each quarter. They boasted a full guest list every night, and Under appeared as a “must visit” on New York’s fashionable lifestyle blogs and guides. Business was booming. And its success meant everything to Jesse and his business partner, Kyle McKee.

In addition to being Under’s co-owner, Kyle also happened to be one of Jesse’s favorite people in the world and one of his favorite partners in bed. Jesse would bet he’d find Kyle out in the speakeasy right now, too, readying the place for opening.

Jesse got to his feet. He locked the papers in the desk, then exited the office and moved toward the long bar that ran the length of the room. Under had a masculine, sophisticated vibe. Sleek leather seating areas dotted the room and open shelves lined the walls, backlit with amber lamps that cast a warm glow over bottles of rare and high-end liquors. On a typical evening, house music throbbed through the air by now, but Jesse and Kyle were holding a private party tonight, and silence reigned, save the sounds of Kyle at work.

“Hey, gorgeous,” Jesse drawled. “When did you get here?”

Kyle glanced up at Jesse’s approach. He smiled and the quirk of his full lips sent a ripple of heat through Jesse’s body.

“About an hour ago.” He shrugged easily. Kyle had dressed in black, as he always did for work, and rolled his shirtsleeves up to the elbow. His muscled forearms flexed as he polished a rocks glass. “I saw Matt upstairs when I came in. He told me you were here, but I figured you’d be busy counting the money. Thought I’d leave you to it.”

Jesse rounded the bar with a laugh. “You know me too well.”

Opening the speakeasy had been a departure from his usual business of running a growing regional media conglomerate with his family. Jesse had never even worked in a bar or restaurant, let alone owned one. But Kyle had mentioned the idea of opening a bar one night over dinner and drinks, and the way his dark eyes had shone had captured Jesse’s fancy.

Jesse had mulled the idea over for several days, then brought it to his brother, Eric. He’d hoped Eric would talk him out of it and had thrown up his hands when Eric merely smiled.

’I’m not sure who you think you’re fooling, Jes,’ Eric had said. ‘I can already tell you’ve made up your mind to do it.’

And so, Jesse had found himself working with his accountants and his lawyer to create a business proposal. Within two weeks of that fateful dinner, he’d presented it to Kyle. They’d celebrated by screwing each other senseless, then started scouting for a location the very next day.

Jesse stepped up behind Kyle now and molded himself against his body. He wound his arms around Kyle’s waist, careful to avoid the glass in his hands.

In many ways, Kyle appeared to be Jesse’s opposite. His elegant, clean-shaven features and dark hair contrasted with Jesse’s short beard and dark-blond, blue-eyed coloring. Jesse broadcasted his emotions, whereas Kyle was more reserved. Both men stood at six feet and were built long and lean, like runners. But where Jesse could be coltish in his movements, Kyle’s were deliberate and graceful. Kyle, Jesse liked to say, had found his Zen.

Jesse nuzzled the side of Kyle’s neck. “I take it last month’s numbers are good?” Kyle’s voice went low and throaty.

“Indeed.” Jesse pulled him closer. He angled his hips and pressed his groin against Kyle’s muscular ass, and his body paid immediate attention to that firm heat. “The numbers are so good, in fact, I think we should celebrate.” He pressed a lingering kiss to Kyle’s throat.

Kyle leaned back into him with a rumbling noise. He set the glass he’d been polishing on the bar. “What did you have in mind?”

“Next weekend off—Masen can handle things in your absence.”

Jesse dropped one hand and palmed Kyle through his trousers, and, oh, yes, he was hard. Kyle let out a soft gasp.

“Friday and Saturday, then,” Jesse bargained. He closed his eyes, heat flashing under his skin as Kyle pushed back and ground against him. “We’ll go to that club in Chelsea you told me about.”

“Oh, fine.” Kyle turned in the circle of his arms. “I’ll bring Jarrod and Gale as backup,” he added, then looped his arms around Jesse’s neck. “They can walk me home after you find someone to disappear with.”

Jesse grinned. “You really do know me too well,” he murmured and covered Kyle’s mouth with his own.

The kiss deepened and Kyle groaned. Jesse palmed him again, his touch rough, and pressed Kyle backward hard into the bar. Kyle’s cock twitched under Jesse’s hand, and he broke away with a sharp inhale.

Jesse let Kyle go and leaned back enough to get his hands on Kyle’s belt. Desire pulsed through him. Quickly, he opened Kyle’s trousers and pushed the dark fabric down his legs. Kyle’s eyes were wild when Jesse looked up again and a flush stained his cheeks and neck. He uttered a soft moan as Jesse sank to his knees.

Jesse kissed Kyle’s thighs. He kneaded the soft, fair skin with his hands and dragged Kyle’s boxer briefs down. Kyle sighed as his cock slipped free of the underwear and jutted up onto his abdomen.

Jesse pressed his face into the juncture between Kyle’s thigh and groin and inhaled the smell of almond-scented soap and sweat and man. “Damn,” he said, his voice low. “You always smell so good.”

Kyle ran his hands over Jesse’s head, then twined his fingers into his short hair. That possessive touch sent a jolt of lust zigzagging down Jesse’s spine. He loved it when Kyle got rough.

Shifting, he held tight to Kyle’s hips and opened his mouth at the base of his cock. He slowly dragged his tongue along its length.

He licked and teased the shaft before he ducked down and caught Kyle’s balls with his tongue. He lavished them with attention until Kyle moaned steadily, then looked up and locked eyes with him. The dazed bliss on his face made Jesse’s dick throb.

“Suck me,” Kyle rasped out.

Jesse pulled back. He braced one arm across Kyle’s abdomen and wrapped his free hand around his base. Very, very slowly, he slid his lips over Kyle, reveling in the bittersweet taste and weight of the hard, velvety flesh on his tongue.

He took Kyle deep and waited until his nose brushed the curls of hair on his groin before he swallowed. Kyle’s eyes went wide. Jesse pinned him against the bar, and he bucked his hips forward, a strangled noise tearing out of him.

Kyle tipped his head back as Jesse sucked. He closed his eyes and swore, and his ragged tone went straight to Jesse’s groin. Jesse dropped his free hand and palmed himself, past caring if he shot in his pants.

He worked Kyle hard with his mouth until a shudder racked his frame. Jesse moved the arm pinning Kyle’s hips, which left him free to fuck Jesse’s mouth. Kyle opened his eyes again and stared at Jesse, his gaze filled with fire. He started to thrust and desire rattled down Jesse’s spine. He groaned with need and closed his eyes when Kyle gasped.

“Gonna come, Jes,” Kyle said, his voice rough and desperate. He tensed at Jesse’s moan. Then Jesse pressed the fingers of his free hand into the soft skin behind Kyle’s balls, and Kyle fell apart with a cry.

He tightened his grip on Jesse’s hair and his knees buckled. Jesse used his shoulder to hold Kyle up. His balls tightened as Kyle pulsed in his mouth, and he swallowed, tasting bitter and salt.

Kyle’s panting breaths echoed through the silent bar. Jesse pulled off, his head swimming, and Kyle freed his shaking hands from Jesse’s hair. He bent and hauled Jesse to his feet, and Jesse stumbled and clutched at Kyle.

“You okay?” Kyle asked with a smile.

“Dizzy. And I wanna fuck you right now,” Jesse muttered. Jesus, he needed to come. He pulled Kyle in for a messy kiss and ground his erection against Kyle’s thigh until Kyle broke away with a breathless laugh.

“I think we’ve violated enough health codes for now,” Kyle said. “Besides, we don’t have any lube or rubbers.”

“There’s some in the office.”

“We used them up last weekend.”

“I said no,” Kyle scolded, his tone playful and his brown eyes gleaming. He pulled his trousers up. No sooner were they buttoned than he sank to his knees and reached for Jesse’s belt. “Lucky for you, there’s time for me to suck you off and clean up.”

Kyle opened his eyes. He hooked his fingertips under the waistband of Jesse’s boxer briefs, then pulled his trousers and briefs down. Jesse hissed. He bit his lip hard when his cock sprang free, and Kyle swallowed him down.

Jesse’s world exploded in a roar of pleasure that wiped his mind clean.

Buy from your favorite retailer: