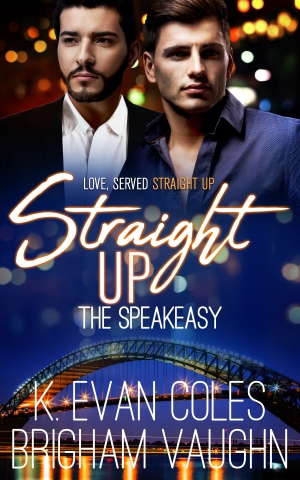 In 2017, Brigham Vaughn and I began The Speakeasy series, a spinoff of the world we’d created in the Tidal duology, Wake and Calm. We sketched out an outline for four books, but I certainly couldn’t picture reaching that final story. With the release of Straight Up, the fourth and final book in the series, we’re each feeling delight and nostalgia in equal measures.

These books and their characters have come to mean a great deal to me and I’ll dearly miss writing them. If you’ve been on this journey with us, thank you so much for your words of encouragement and the love you’ve shared with us over the last two years. I’ve truly treasured every moment.

Be sure to follow the blog tour through June 14. There will be interviews and blog posts, and you’ll have a chance to win a $10 Amazon gift card.

Malcolm Elliott has been keeping secrets. Helping his mom through a financial crisis has nearly emptied his bank account and his kitchen cupboards, despite his thriving career with Corporate Equality Campaign. Malcolm is also bothered by his inability to tell the most important people in his life that he identifies as gray ace.

Stuart Morgan has a secret of his own. Though years have passed since the tattooed chef fled the Mormon church in Utah for New York, he’s never truly come to terms with the fetish that ruined that rigid but outwardly perfect life. Experience has also taught Stuart that keeping his love of lacy things under wraps is safer than telling the truth.

After Malcom’s boss, Carter, hires Stuart’s restaurant to cater a gala fundraising event, the strait-laced Malcolm is thrown together with badass biker Stuart. Despite their differences and a couple of false starts, the men discover they work well together and a friendship quickly forms.

As Malcolm’s feelings for Stuart deepen, his sexuality awakens, but he remains tight-lipped about his problems. And though Stuart grows more and more attached to Malcolm, he remains fearful of confessing his fetish.

When both of their secrets are finally exposed, they find themselves at a crossroads in which they must choose between playing it safe or finally coming clean to the person they love.

Buy Straight Up from your favorite retailer:

K. Evan Coles is a mother and tech pirate by day and a writer by night. She is a dreamer who, with a little hard work and a lot of good coffee, coaxes words out of her head and onto paper. K. lives in the northeast United States, where she complains bitterly about the winters, but truly loves the region and its diverse, tenacious and deceptively compassionate people. You’ll usually find K. nerding out over books, movies and television with friends and family. She’s especially proud to be raising her son as part of a new generation of unabashed geeks. K.’s books explore LGBTQ+ romance in contemporary settings. View more posts