I’m new to RJ Scott’s autism blog hop and honored to participate. I paused over the theme of childhood toys, though, because in my family, toys were very much a community affair.

I grew up the oldest of four siblings–two sisters and two brothers–and virtually everything given to one kid became part-owned by the other three. We had a healthy mix of dolls and trucks and building sets, and everything was played with and argued over equally, regardless of gender stereotypes.

My parents worked at giving us each “our own” presents on birthdays and holidays, but we kids knew the score. I might be the one to unwrap a set of matching silver six-shooters, but they weren’t really mine— they were everybody’s. The exception to this unwritten rule were the children’s books my grandmother bought.

In an effort to give me something (almost) of my own, my grandmother bought children’s books through a mail order service. The books arrived monthly, starting when I was seven or eight, and I’ll never forget how exciting it felt to be handed a broad, flat package and tear it open to find out what kind of book I’d be reading next.

My sister and I shared the books, and they were kept at my grandmother’s house, “safe” from our younger brothers. (The boys were deeply uninterested in books at the time anyway, so no one’s feelings were hurt.)

I probably spent hundreds of hours with those books growing up, sometimes in my sister’s company and sometimes not. I came to regard reading as a special time just for me and have discovered that my own son treats reading time with similar reverence.

As an only child, B. Coles has had more toys than any one kid needs. He’s eleven years old now, and non-electronic toys have lost a lot of their appeal. B.’s love of books and reading hasn’t wavered, however, and he takes great pleasure in receiving books. The photo above is of his current collection (and, he’s reminding me, his Pokémon cards in the yellow tubs on the bottom shelf).

For my giveaway, I’d like to gift someone a $5 Amazon gift card. Just comment below and tell me what your favorite toy or plaything was as a child and whether you had to share it. I’ll choose a name next Thursday.

I’m supporting The Asperger/Autism Network (AANE), an organization local to me that works with individuals, families, and professionals to help people with Asperger Syndrome and similar autism spectrum profiles build meaningful, connected lives. To donate and learn more, check out https://www.aane.org/.

If you haven’t checked out my latest release, it’s Extra Dirty, Book #2 in The Speakeasy series, which I co-write with Brigham Vaughn. It’s a lot of fun, if I do say so myself. 🙂 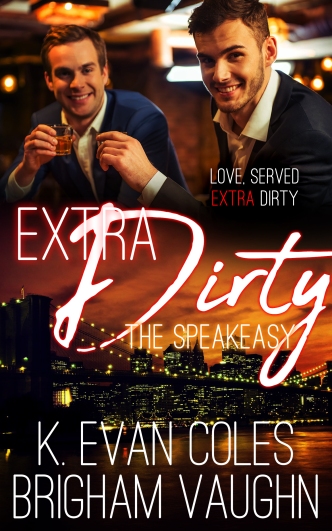 Available now from your favorite retailer:

K. Evan Coles is a mother and tech pirate by day and a writer by night. She is a dreamer who, with a little hard work and a lot of good coffee, coaxes words out of her head and onto paper. K. lives in the northeast United States, where she complains bitterly about the winters, but truly loves the region and its diverse, tenacious and deceptively compassionate people. You’ll usually find K. nerding out over books, movies and television with friends and family. She’s especially proud to be raising her son as part of a new generation of unabashed geeks. K.’s books explore LGBTQ+ romance in contemporary settings. View more posts