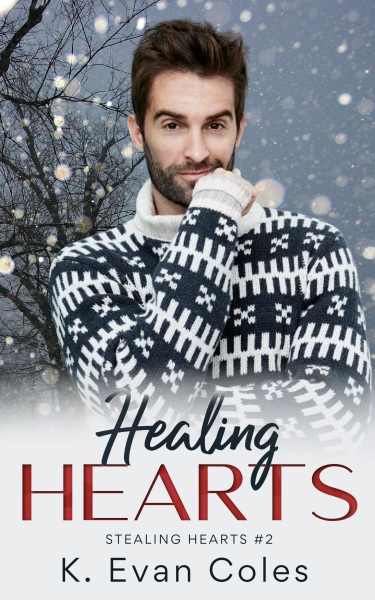 Earlier this year, I released Thief of Hearts, a novella for Valentine’s Day. I enjoyed the world I’d built so much, I decided to revisit it for the winter holiday season and wrote Healing Hearts, book two in the Stealing Hearts series, a sexy, hurt-comfort novella featuring a May-December romance.

Some hearts are made to be mended.

Zac Alvarez never expected to start his life over at forty-five, but his recent divorce means doing just that. Luckily, his career as a nurse in Boston keeps him busy and he has friends who understand Zac’s need to be as careful with his heart as he is with his diet.

Acting on a whim one fall afternoon, Zac buys lunch from a food truck and meets Aiden Marinelli, a bold young chef who is taking the city’s food scene in new directions. Aiden is only thirty, a fact that doesn’t sit well with Zac, but both the chef and his food prove impossible to resist.

An attachment forms between the two men and, as the winter holidays draw near, Zac begins to emerge from the protective shell he’s built around himself. A chance encounter with his ex-husband shakes Zac’s newfound confidence, however, and he pushes Aiden away, unaware how deeply the act will hurt them both until it is too late.

Zac stuffed his phone in his pocket. “Sorry. You caught me napping,” he said.

“I’d say I caught you texting.”

A young man in a black t-shirt and matching bandana tied over his head smiled at Zac from the food truck’s window while people worked in the space behind him. “Have you decided what you’d like to order?”

“Oh! Yes, I have.” Zac’s cheeks grew warm, and he reached for the glasses in his breast pocket. “Two orders of the pasta with cheese and pepper. I’m a nurse, by the way, not a doctor.”

“Those blue scrubs get me every time. Y’know, some of my favorite people are nurses,” the food truck guy said before he called out over his shoulder. “Cacio e pepe, two!” He turned back to Zac. “The pasta is spaghetti today, in case you were interested. Anything else?”

“I have one already,” Zac said and motioned to his bag.

The food truck guy nodded once, then turned his attention to the order. Zac watched as he portioned field greens and whisked dressing, but really, Zac was more interested in watching the food truck guy himself. He was striking with creamy skin and smiling eyes, his bone structure and features strong and elegant. Intricate tattoos stretched from under the right sleeve of his t-shirt to a few inches below the elbow, including a thick equality symbol on his inner forearm. He glanced up at Zac, and the way the right side of his mouth curled up made Zac want to smile back. For a second, Zac forgot about the message from Edward and that his legs and feet were tired from being on shift.

“Thanks, Em,” the food truck guy said as another member of the crew set two steaming take-out containers on the counter. “These look great, if I say so myself.”

Producing a narrow blade grater and a small block of what Zac guessed was parmesan, he garnished the hot noodles with pale curls of cheese then finished the dish with several turns from a beat-up pepper grinder. The luscious aromas that rose in the air woke Zac’s forgotten hunger, and he found himself looking forward to eating much more than usual.

“Don’t wait too long to eat these,” the food truck guy said. He closed the tops of the brown cardboard boxes and the inked designs moved on his arm. “The sooner you tuck in, the better.”

“No worries there.” Zac handed over his debit card.

“I packed extra salad dressing for you, by the way.”

“You did?” Zac had to smile. “Well, thank you. Is that your way of saying your salad dressing is better than mine?”

“Nope.” The corners of the food truck guy’s eyes crinkled with his grin. “It’s my way of saying you should try my dressing, though, because you won’t be sorry that you did.”

Zac laughed. Despite the cocky words, the food truck guy’s tone was sincere. “That good, huh?”

“That good. Just like everything we make on this truck.” He handed a brown paper bag and Zac’s card through the window. “Buon appetito.”

The food truck guy wet his lips with a quick dart of his tongue, and Zac stared for a moment before he caught himself. Cheeks hot again, he turned to go.

“You come back tomorrow and let me know what you think of the spaghetti!” the guy called after him, and damn if that didn’t make Zac’s steps a little lighter.

Healing Hearts, Stealing Hearts #2, is available for purchase on Amazon or to read through Kindle Unlimited.